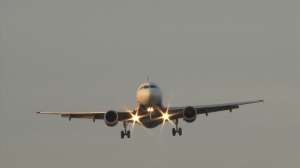 I think I’ve been blogging about OCD for too long. When I was on a turbulent three-hour flight last week, I found myself analyzing my intense anxiety, comparing it to OCD, and then composing a blog post in my head (which I then totally forgot, so I’m starting from scratch).

Flying is not my favorite thing, but I do it anyway. No avoidance here. So when I’m on an airplane, especially when I’m traveling alone, I am more anxious than usual. Take-offs are the worst, and then I’m usually fine. On this particular flight, we started out with some mild turbulence, at which point I began repeating to myself, “It’ll be okay, it’ll be okay, it’ll be okay.” Then I smiled. Did I really think repeating “It’ll be okay” over and over would make things okay? If that’ s not a cognitive distortion (magical thinking anyone?) I don’t know what is.

I wondered whether my intense anxiety was similar to what those with OCD experience. “Well, I’ll just try some ERP Therapy,” I thought. I faced my “obsession,”  the fear of being on an airplane that would crash. I had no choice anyway; I couldn’t just walk off the plane. Next I needed to refrain from my compulsion of repeating “It’ll be okay, it’ll be okay, it’ll be okay.” I was easily able to do this (after all, I don’t have OCD…do I?) but as soon as I stopped reciting my mantra, I noticed scary thoughts and images related to my fear making their appearance. I realized these were just thoughts and instead of trying to suppress them, I just let them pass by. Which they quickly did. I was aware the whole time that what I was thinking was highly unlikely to happen. I mean, when was the last time a plane crashed because of turbulence? But it could, right? Ah, good ol’ uncertainty.

As I was busy analyzing myself, the loudspeaker came on. Finally, some reassurance from the pilot! I know reassurance is a no-no, but hey, I don’t really have OCD, so it’s okay, right? The pilot was all business. “We are likely to experience strong turbulence for the next hour or so. Everyone, including flight attendants, needs to remain seated with seatbelts fastened.” No lightheartedness, no lilt in his voice, no jokes. This must be serious. Not only was this not the reassurance I’d been hoping for, it was just the opposite, and my anxiety spiked. “It’ll be okay, it’ll be okay, it’ll be okay.” Oh wait, I’m not supposed to say that…….

Twenty minutes later the turbulence had subsided and we were being served our drinks and snacks. As is often the case, things had not been as bad as anticipated, and the rest of the flight was uneventful.

I know I don’t know what it feels like to have OCD, but maybe, for a half hour, I came close. Of course, one of the big differences is my feelings on that airplane were an exception for me, not the norm. I can’t imagine feeling that way regularly, as those with OCD do.  I truly appreciate the fact that I’m usually free to move about the cabin.