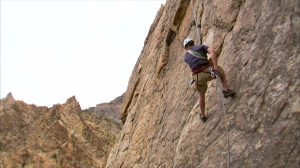 At the time my son Dan’s OCD was at its worst, he had not eaten in over a week. I flew down to be with him at his college, and though he was only two weeks away from completing his freshman year, he knew he would have to leave school if he couldn’t eat. It was torturous for him, but somehow, he mustered the courage to consume a meal. I was so relieved. Now he could eat; he was on his way to recovery!

Obviously, I knew little about obsessive-compulsive disorder at the time. The next morning, I brought him some food for breakfast, and we were back to square one. He just couldn’t do it. I remember saying to him, “But you just ate yesterday! Nothing bad happened, so why can’t you eat now?”  In her recent blog post, my friend Sunny talks about this common reaction from people who do not have OCD. We can’t  understand. “You did it before, why can’t you do it again?”

The problem with this thought process is that it is logical. Most of us can relate to overcoming obstacles: We climb our mountains and work through our fears. For those of us without OCD, that is often the end of it. We have conquered our demons; we move on.

But OCD is not logical. One day you can drive 500 miles and be fine, the next day you can’t drive around the block without stopping five times to see if you hit someone. There is no linear progression here; no predictable course. If you think this is hard for those of us without OCD, imagine being the one with the disorder!  In addition to their own frustration, OCD sufferers might also have to deal with their annoyed friends and impatient families, who just don’t get it, or even worse, think they’re faking.

What really helped me in grasping the unpredictability of OCD was personifying the disorder. Once I was able to envision Dan’s OCD as separate from himself, it was actually quite simple to understand. Dan versus OCD. Two powerful forces at odds. Sometimes the OCD was just too strong to contend with, other times not so much. Of course, with the proper therapy, Dan was able to prevail more often, until he got to the point where he now wins almost all his run-ins with the disorder. But really, I think what is most important is not necessarily who wins each battle, but that all those with OCD just keep on fighting.

16 Responses to Dan Versus OCD