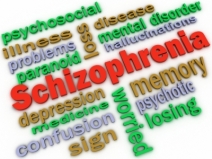 A recent study published this month in JAMA Psychiatry suggests that those who suffer from OCD might be at a higher risk than the general population for developing schizophrenia. I immediately thought back to a post I wrote just one year ago titled OCD and Psychosis, where I discuss the fact that symptoms of severe OCD can sometimes overlap with symptoms of a psychotic disorder.

As I read the synopsis of the study, a few things jumped out at me that I think are important to keep in mind. For one, the incidence of schizophrenia in the general population is about one percent. The new study concludes that the occurrence of schizophrenia in those previously diagnosed with OCD is two percent. So while this is a significant increase, there is still a ninety-eight percent chance that those with OCD will not develop schizophrenia. Additionally, Dr. Aaron Pinkhasov, chairman of the department of behavioral health at Winthrop University Hospital in Mineola, NY, makes this observation about the study:

Notably, the study only looks at patients who have come in contact with a psychiatric hospital. As the majority of mild and moderate OCD patients are treated by general practitioners in an outpatient setting, it makes it difficult to apply these findings to all patients suffering from OCD. Hence the risk may in fact be somewhat overestimated.”

So there might be less than a two percent chance of those with OCD developing schizophrenia.

“At least some of the association may have been a result of misdiagnosis in patients before they developed more specific symptoms of schizophrenia.”

There is no question in my mind that this study should be taken seriously. Future research could lead to findings that benefit both those with OCD and schizophrenia. But I believe we need to be careful as well, because things are not always as they seem. In the case of brain disorders, where we’ve categorized certain behaviors as belonging to specific illnesses, it can be difficult to know where one disorder ends and another one starts. Research results are also not always clear-cut. In this particular study, the authors conclude, “Further research is needed to disentangle which genetic and environmental risk factors are truly common to OCD and schizophrenia.”

OCD, schizophrenia, and other brain disorders can be complicated and confusing in their origins, their diagnoses, and their treatment. As more research is conducted, my hope is that all the pieces of the “OCD puzzle” will one day fall into place. Diagnosis and treatment will be easier, and as long as I’m wishing, a cure will be found.

12 Responses to OCD and Schizophrenia