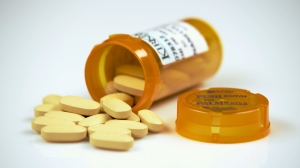 This week I’m sharing one of my posts from May 2012. I plan on being back next week with something new!

The topic of medication for obsessive-compulsive disorder comes up a lot in blogs, and always seems to incite lively conversation. There is talk of the stigma surrounding medication; some patients admit to feeling weak, or like a failure, for needing meds, even though intellectually they know it’s no different from taking medication for any other illness. Others are adamant about never taking anything because it’s just “not for them,” while some are completely fine with taking meds. There are those who say meds have wreaked havoc on their lives, while others swear that medication literally saved their lives. Doctors themselves confirm that the use of psychotropic medication involves a lot of “trial and error.”

Everyone’s story is different, of course, and I think that’s what makes the issue of medication for OCD so complicated. There’s no set protocol. What helps one person may hurt someone else. What works for someone now might not work for them in six months or a year, or it’s possible one particular medication could be helpful for their entire lives.

For me, the question that often seems so hard to answer is “How do you really know if your meds are helping you?” In a previous post, I wrote about how poorly my son Dan was doing when he was taking various medications to combat his OCD. At the time I thought, “If he’s this bad off with the meds, I hate to think what he’d be like without them.”  Turns out the meds were a huge part of the problem, and once off them, he improved by leaps and bounds.

Of course this is just his story. Others have stories of great improvement with meds. Still others have stories that are not so cut and dried, so obvious. If someone has been on a medication for a year and is feeling “okay,” we don’t know if they would feel better, or worse, without it. Unless we’re able to clone ourselves and conduct a controlled experiment where the only variable is the medication, there is no way of really knowing how a drug is affecting you.

Because of this ambiguity, I think it is so important to share our stories, both of success and failure, in regards to using medication for OCD. Sharing can raise awareness of side-effects, drug interactions, and withdrawal symptoms. It can also bring attention to the possible benefits of certain drugs, as well as new medications on the horizon. While having a doctor you trust is essential, it is also important to advocate for yourself and learn everything you can, good and bad, about the medications you are taking or considering.

23 Responses to OCD and Medication