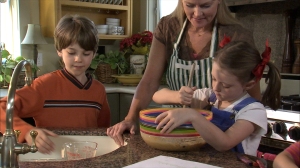 Obsessive-compulsive disorder affects not only those who have it, but their whole family as well. Being privy to the havoc the disorder often causes can be especially disrupting, confusing, and upsetting to children. While parents are likely expending every ounce of energy they have trying to help their child with OCD, I think we need to remember that siblings suffer also.

In my family’s case, Dan’s OCD was not evident until he started college far from home, so his sisters weren’t around him. That’s not to say their lives weren’t affected. While our older daughter was living on her own at the time, our younger daughter was still at home. With our limited knowledge, my husband and I explained Dan’s illness to them as best we could, and kept them up-to-date on what was happening with him.

In retrospect, we should have done more. At the time, only our immediate family knew about Dan’s OCD,  so our daughters really couldn’t talk with anyone else about the situation. My husband and I should have talked with them more about their feelings. Were they jealous that Dan was getting so much attention? After all, I spent three weeks fifteen hundred miles from home helping him get through his freshman year of college. Did they feel confused (I think that’s pretty much a given; we all were), scared, worried about their brother, or neglected? What were their fears and concerns? Did they think they might develop OCD also?

Why didn’t we pay more attention to our other children? While there’s no good excuse, the reality is we were totally immersed in caring for Dan. Figuring out what was wrong, how he should be treated, who we should trust. And that was the tip of the iceberg. And the girls seemed okay. One was a teenager and the other was in her early twenties, so they had their own busy lives they continued on with. We were lucky there weren’t any major sibling issues. I think this is mostly due to our children’s ages and the fact that Dan was away from home when things got really bad.

But what about younger children who are living day-to-day with a sibling who has OCD? How are they affected? Are they teased about their brother or sister at school? Do they feel uncomfortable in their own home? Do they think their sibling’s OCD is somehow their fault? Do they feel frustrated because they want to help their sibling and don’t know how? Are they jealous? If a sibling is part of a child’s OCD (for example, the child with OCD might think his brother or sister is contaminated), how is that being dealt with? These are just some of the many complicated issues that might arise. Therapy, and perhaps a support group, can be helpful for siblings.

There is no question OCD is a family affair. I feel for parents who not only need to help their child with OCD, but care for their other children as well. It’s hard, and we all do the best we can. And maybe that’s enough, as I do believe our children sense our love and good intentions.

When our lives calmed down my older daughter told me she thought it was “really great” that we supported Dan as much as we did. That’s when I realized actions often speak louder than words. Witnessing Dan’s crisis from the sidelines, she was comforted by the realization that her parents would always be there, not only for her brother, but for her and her sister as well.

4 Responses to OCD and Siblings