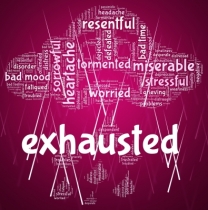 I’ve been blogging for over seven years now, and my most-read posts, by far, are those that discuss sleep and sleep deprivation. As I’ve previously written, OCD, by its very nature, is unconducive to a good night’s sleep. How can you sleep when you have to continually check to make sure the door is locked or the stove is off? How can you relax when you need to review your entire day in your head to make sure you didn’t do anything wrong? How can you breathe easily when you find yourself ruminating on, of all things, not being able to sleep? Really, as anybody with OCD most likely knows, the possibilities are endless.

Sleep is critical to our well-being, whether we have OCD or not. But for those with OCD, it can be a vicious cycle: They can’t sleep because of their OCD and this lack of sleep intensifies the disorder.

A recent study presented at the 31st Annual Meeting of the Associated Professional Sleep Societies suggests that the amount of sleep we get isn’t the only important factor deserving of consideration. Timing – when we sleep – also plays a vital role in our well being. In fact, in those with obsessive-compulsive disorder, a late bedtime is associated with a lower perceived control of obsessive thoughts and compulsive behaviors.

When my son Dan’s OCD was severe, he would typically be up all hours of the night, pacing and giving in to whatever OCD was demanding at the time. We’d often find him on a couch (or less frequently on a floor) in the morning – fast asleep wherever he happened to collapse from exhaustion. I know this type of disordered sleep is not uncommon in those with OCD. I just never realized how detrimental it truly is.

In this article, one of the researchers, Binghamton University professor of psychology Meredith E. Coles, PhD, says:

“I always knew you were supposed to get 8 hours of sleep, but I was never told it matters when you do it. It’s been striking to me that this difference seems to be very specific to the circadian component of when you sleep. That we find that there are specific negative consequences of sleeping at the wrong times, that’s something to educate the public about.”

“It’s one of our first efforts to actually shift their bedtimes and see if it reduces their OCD symptoms, and if this improves their ability to resist those intrusive thoughts and not develop compulsions in response to them.”

While this important research is underway, I think the best thing those with obsessive-compulsive disorder can do is to continue fighting their OCD as much as possible with exposure and response prevention (ERP) therapy. I know for Dan, once his OCD was under control, a good night’s sleep followed. My guess is this is true for many others as well.

8 Responses to OCD and Sleep Timing