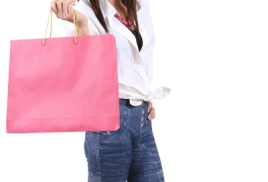 By the time my son Dan entered a residential treatment center for OCD, he was barely functioning. Using exposure and response prevention (ERP) therapy he tackled his hierarchy and slowly but surely regained his life.

During his stay, one of his exposures was to go on shopping trips and make purchases. All types of shopping proved difficult for him – buying groceries and necessities, clothing, etc., but the more expensive purchases, particularly if they were for himself, seemed to be the most stressful.

But he did it. And he felt the overwhelming anxiety. And he refrained from doing compulsions. Over and over again until shopping was no longer an issue for him. At the time I thought this fear of shopping was an odd obsession, but I have since heard of others with OCD who, for whatever reason, have difficulty shopping. For some people it might be about having to make the “right” decision, others might have an issue with spending money, and still others might feel something tragic will happen if they make a particular purchase. The list of possibilities goes on, but no matter what the reasons are behind a fear of shopping in those with OCD, the treatment is the same – exposure and response prevention therapy.

But what about the opposite of being afraid to shop? Hoarding disorder is very real and can affect both those with obsessive-compulsive disorder and those without. While it is related to OCD, it is considered a distinct disorder, and a complex one at that. Those who hoard form very powerful attachments to objects and for many, having to dispose of possessions makes them feel as if they are losing a part of themselves. Cognitive Behavioral Therapy (CBT) has been shown to be effective in treating hoarding disorder.

As with most things related to OCD, it can get complicated. While my son Dan’s fear of shopping was tied into an obsession (and his compulsion before treatment was avoidance of shopping), for others with OCD, shopping might present as a compulsion. For example, a person with OCD might feel as if they have to buy a particular clock they saw in a store or something horrible would happen to someone they love. Or they might believe if they go ahead and buy the clock, something terrible might happen. In both cases, the obsession is something terrible happening, and the compulsion, which gives temporary relief, is buying (or not buying) the clock. Shopping as a compulsion might or might not be related to hoarding disorder as well. Yes, it can be confusing!

If you have OCD and deal with shopping (or fear of shopping) as an obsession or compulsion, I strongly suggest seeking good professional help with an OCD therapist. What it all comes down to, once again, is learning to not give in to OCD but instead accepting the uncertainty of life. Once this is accomplished, most people with OCD experience a level of freedom they never thought possible.

6 Responses to OCD and Shopping