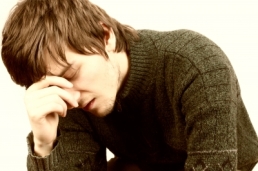 When my son Dan’s OCD was severe, he was always exhausted. At first I attributed his lack of energy to the fact that he rarely slept well. But it soon became obvious, even when sleeping was not an issue, that he always felt tired.

I think there are many reasons why those with obsessive-compulsive disorder are often exhausted. Living with nonstop anxiety can be draining. Many people with OCD are also depressed, and depression and lack of energy often go hand in hand. Additionally, some medications used to treat OCD are known to cause fatigue.

And the very nature of OCD (left untreated) is exhausting just to think about, let alone live with. Relentless obsessions and compulsions – an endless cycle that takes up every ounce of your energy. And the pretending! So many people with OCD do whatever they can to hide their disorder – to keep up that facade of “normalcy.” I think it would be surprising not to be tired!

So what’s the best thing to do when you feel this overwhelming exhaustion related to obsessive-compulsive disorder? Sleep until you feel better? Wait for it to pass? After all, the way you feel now, you have no energy or motivation to do anything, especially exposure and response prevention (ERP) therapy which is exhausting in its own right.

As with so many things related to OCD, you should do the opposite of what you feel like doing.

I know it’s not easy. In fact it’s incredibly difficult. Mental and physical exhaustion take their toll in many ways, from physical ailments to depression to doubt in your ability to improve or change your life. Ah, that old word – doubt. Those with OCD often doubt their strength and ability to get through difficult times, but in fact they are just as capable, if not more so, than those without OCD.

Studies have shown that attitude plays a big part in overcoming adversity. If you’re so tired that you feel there’s no way you can fight your OCD, then you won’t fight it. However, if you acknowledge your exhaustion but still vow to move forward, even in small ways, then you will be one step closer to fighting your OCD. A good therapist who specializes in treating OCD can be helpful with setting goals.

So many of us wait to take action until we feel motivated, but sometimes we just need to do the opposite. We need to take action and eventually the motivation will follow.

If you are feeling exhausted, lethargic, and completely drained from your OCD, please don’t wait for it to pass. It won’t – OCD will just keep getting stronger. Take some steps to plow through the exhaustion and move forward to fight your OCD. The more you fight, the weaker your OCD will become, and slowly but surely, you will beat OCD and your exhaustion will give way to a renewed joy in life.

This entry was posted in Mental Health, OCD and tagged doubt, effects of exhaustion, insomnia, keeping up a facade, lack of motivation. Bookmark the permalink.

24 Responses to OCD and Exhaustion