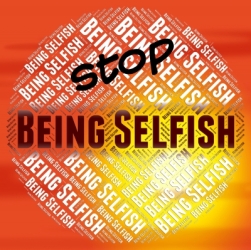 Soon after my son Dan was diagnosed with obsessive-compulsive disorder, he and I were out with some friends and decided to get a bite to eat. We were all casually chatting about various restaurant choices when Dan suddenly insisted we go to one particular place. He was adamant; we needed to eat there. So off we went. If I remember correctly some glances were exchanged (“What’s up with him?”) but nobody complained and we all went along.

I knew very little about OCD at the time, but what I did know was that this seemingly selfish behavior was totally out of character for my son. In fact, it was the exact opposite of the “real Dan” who’d always been so easy-going and eager to please others. I’ve written before about the convoluted way in which OCD operates and how it usually makes sense for those with OCD to do just the opposite of what their disorder demands. I think it’s also true that  those without the disorder often get the wrong impression, indeed the opposite impression, of the true nature of those suffering from OCD.

At the time, our friends didn’t know that Dan had OCD, but I’m not convinced that would have mattered. They likely thought Dan was selfish because he demanded we eat where he wanted to eat, with no regard for anyone else’s preference. The truth was Dan’s OCD made him believe we all had to go to that particular restaurant or something bad would happen. He wasn’t being selfish; he thought he was protecting those he cared about. Compulsions involving doing certain things at specific times or in a particular way, or being inflexible in various ways, all can be misconstrued as acts of selfishness. I’m sure everyone who has OCD as well as their loved ones could easily come up with their own examples.

But really, it’s all a big misunderstanding. Most people without OCD do not understand that those with the disorder feel they do not have a choice. They don’t choose, or even want, to act this way; they have to. It’s not about what they want; it’s about what their OCD demands. They are held captive by obsessive-compulsive disorder.

If I had understood what was happening when Dan insisted on going to that restaurant, I could have not enabled him, which we know only makes OCD stronger. Those with and without OCD need to be educated and those who are suffering need to get the appropriate treatment. Once they choose to fight it will be clear to others, as well as to themselves, who they really are.

This entry was posted in Mental Health, OCD and tagged do the opposite, enabling, misconceptions about OCD. Bookmark the permalink.

6 Responses to OCD and Selfishness